It's been three weeks since Ropecon, and a week since I returned from Worldcon. That's plenty of time to recover enough to finally write something about those two events which both took place in Helsinki, at Expo and Convention Centre.

Honestly, it feels to me that Ropecon was a little warm-up before "the real deal", Worldcon. The three days in Ropecon were nice and a little quiet, giving me a chance to learn how to navigate between the Expo Centre and my friend's apartment and generally get familiar with the city that seemed so big to me. 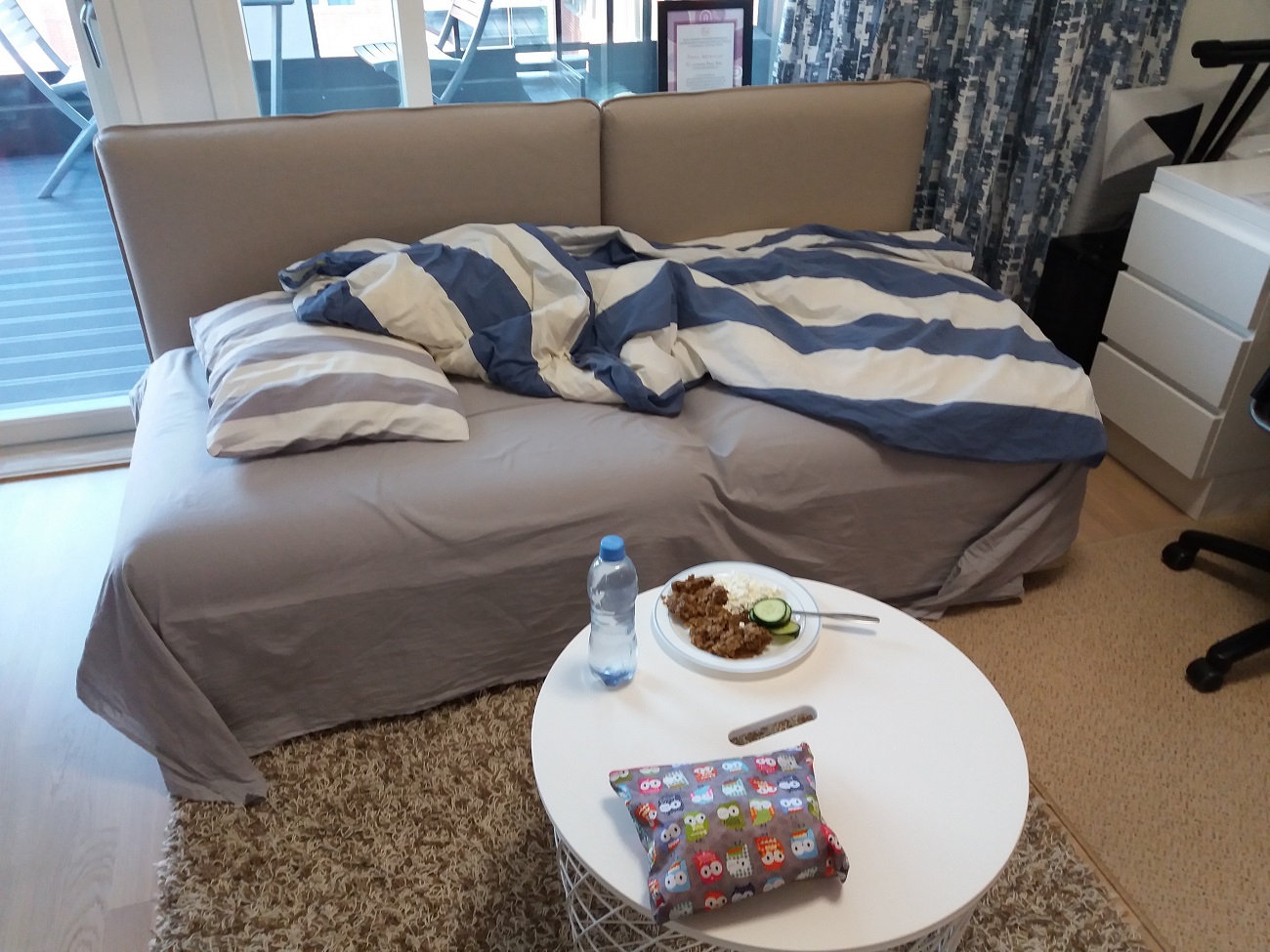 My deepest gratitude to my friend whose place I stayed at during both of the events. I had a whole sofa for myself, which was such a luxury after all the times I've had to sleep God knows where. 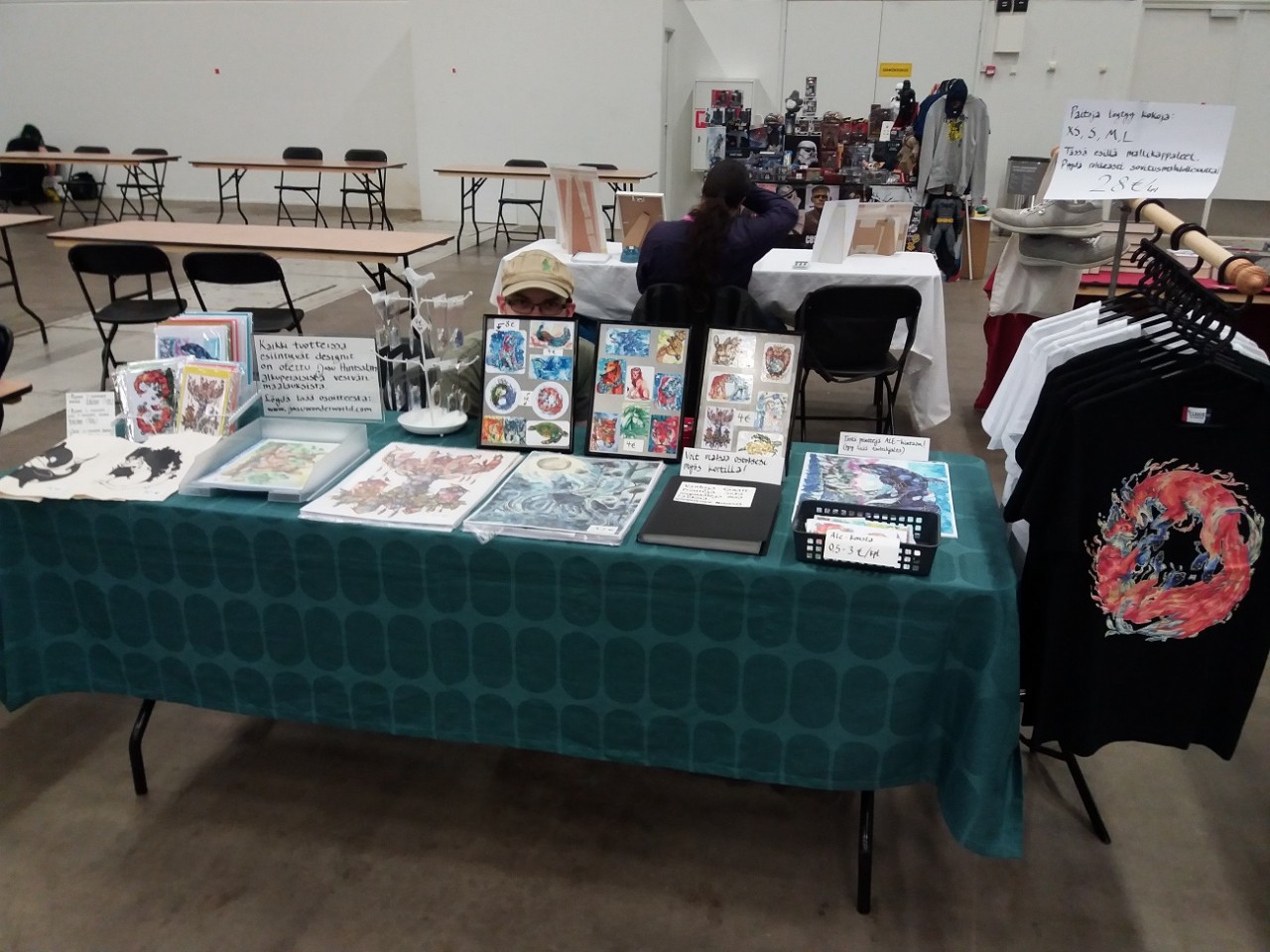 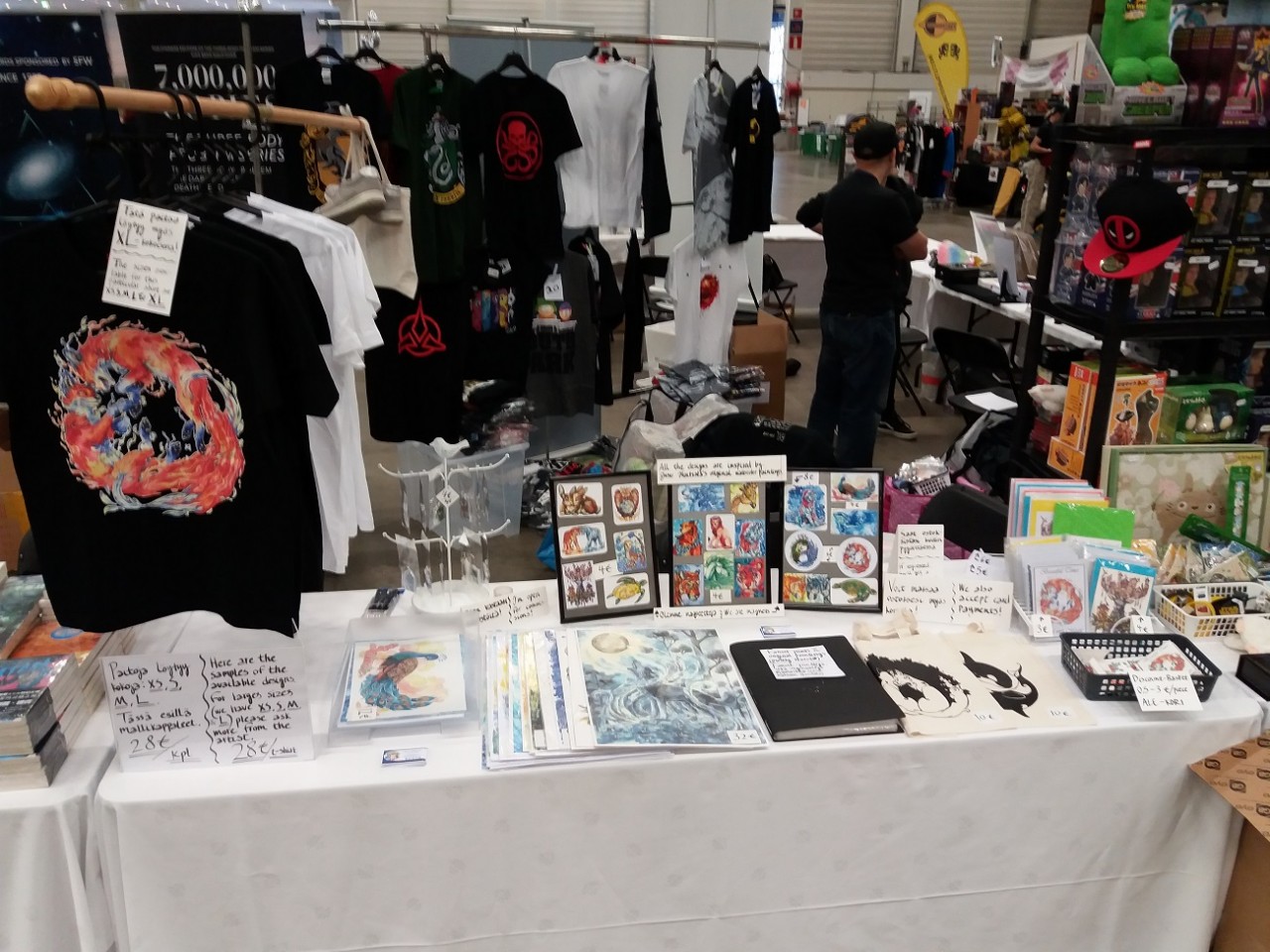 Table comparison time! On the left there's my table at Ropecon, on the right at Worldcon. Ropecon table seems to be better organized because there was so much other sellers' stuff behind my table at Worldcon. There was also less room for my shirts there so that I had to arrange the rack to hover on top of my table, when it usually (as can be seen in the Ropecon picture) is placed next to it. 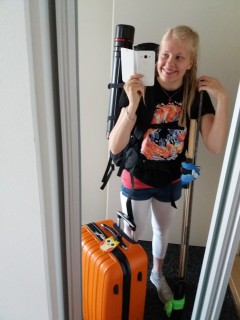 Seen above my sleepy morning face when I'm just about to leave for my first day at Worldcon. Arriving to Expo Centre I went through all the wrong doors and had to go around the whole place before I found out where to get my badge for the trade hall. Then I had to stand in line for a good while before finding out that I was missing a bar code that was needed for the badge. Luckily it turned out that I could prove my identity in other ways and got my badge. I then hurried to the trade hall (that I was finally allowed to enter) and managed to get my table done just in time when the doors opened for the audience.
These days it's almost unbelievable to me that I can manage to fit all my products into my suitcase and backpack. I have so much on the table, and sooo much more behind it! After all, only the samples of my products are on the table. The rest waits behind it for their turn to be sold. Sometimes I'm amazed of how I'm able to do this all on my own. But then again, there are always times I need to ask people for help (which most of the time has something to do with lifting my stuff).

On third day of Worldcon, this was a very necessary action to take.
I could write a book about how spectacular Worldcon was! I met some incredibly amazing people, had such a good time I almost had a burn out, had super-good sales and got so inspired that I've never been as determined to reach my dreams as I am now. 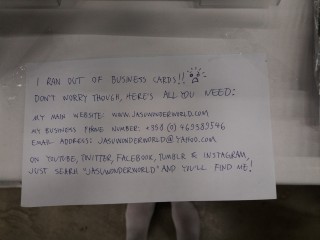 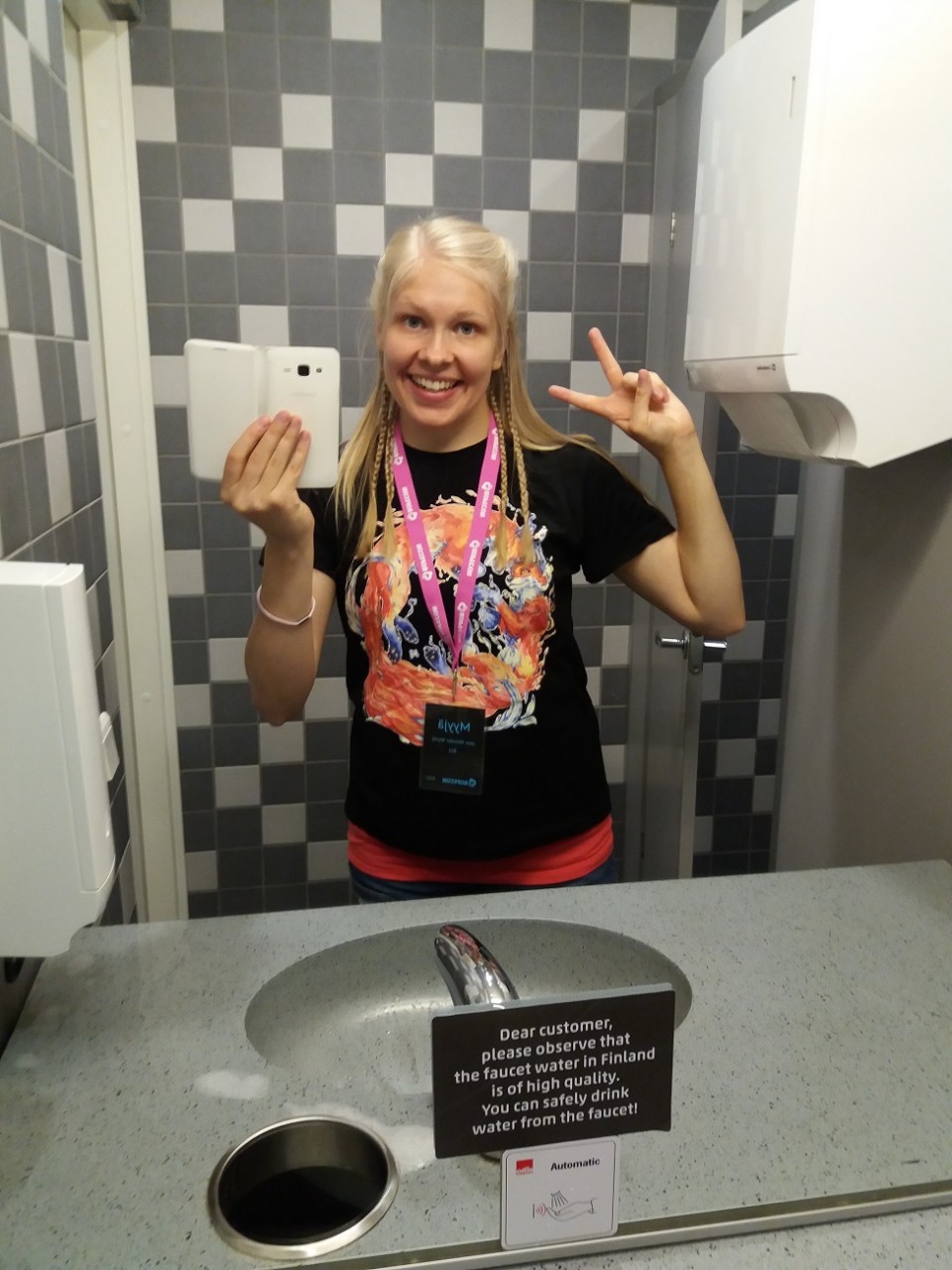 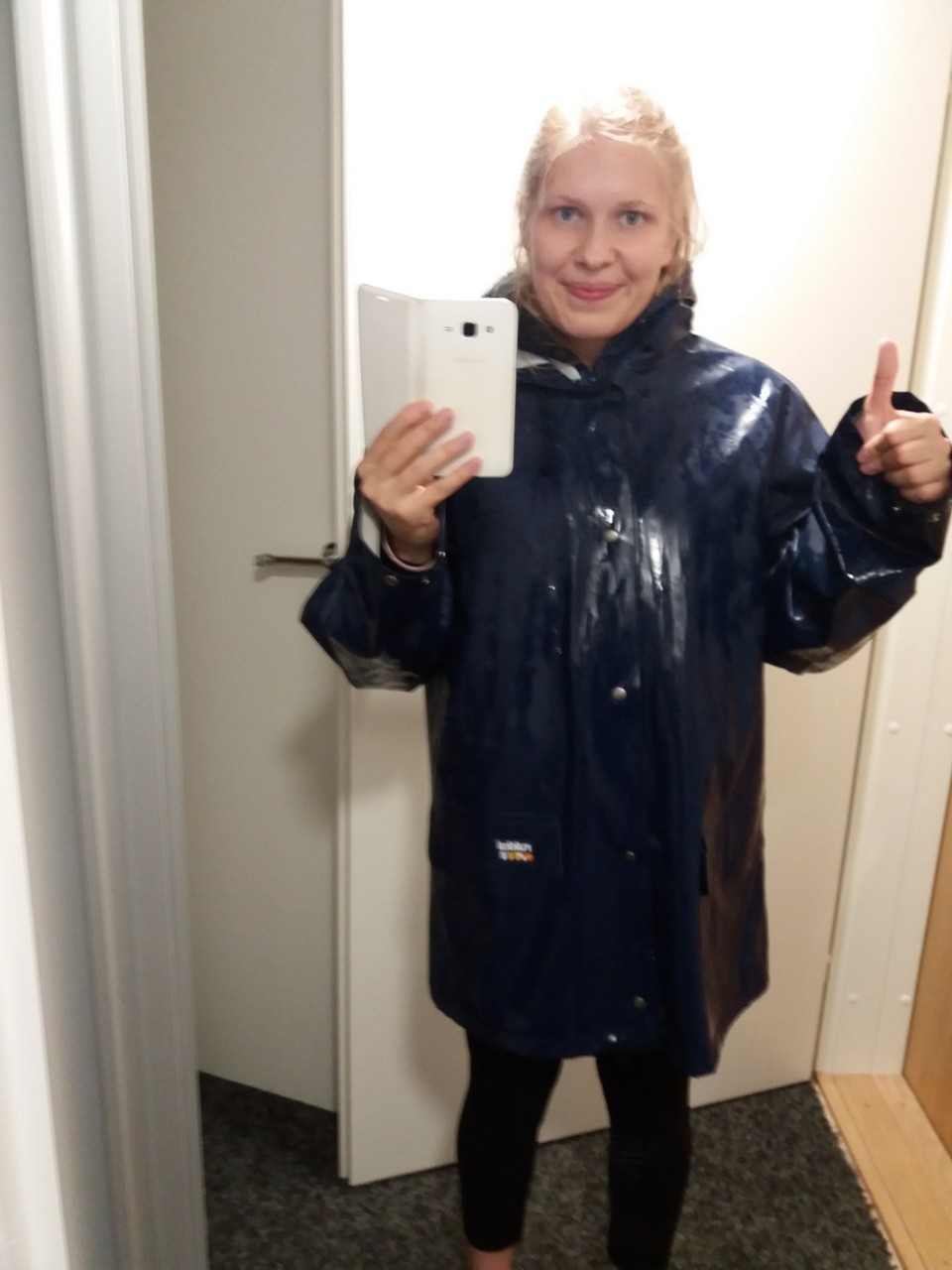 Three artist selfies: Ropecon, double-Worldcon and after-storm versions. On Saturday there was a crazy storm hitting Helsinki just when I was leaving the Expo Centre. In addition, there was an ongoing marathon happening exactly that time and the bus that was supposed to take me very close to my friend's apartment didn't do so. Thus I had to walk about 20 minutes in the pouring rain while the lightning bolts lighted the world around me almost every 5 seconds. But damn, it was exciting!! 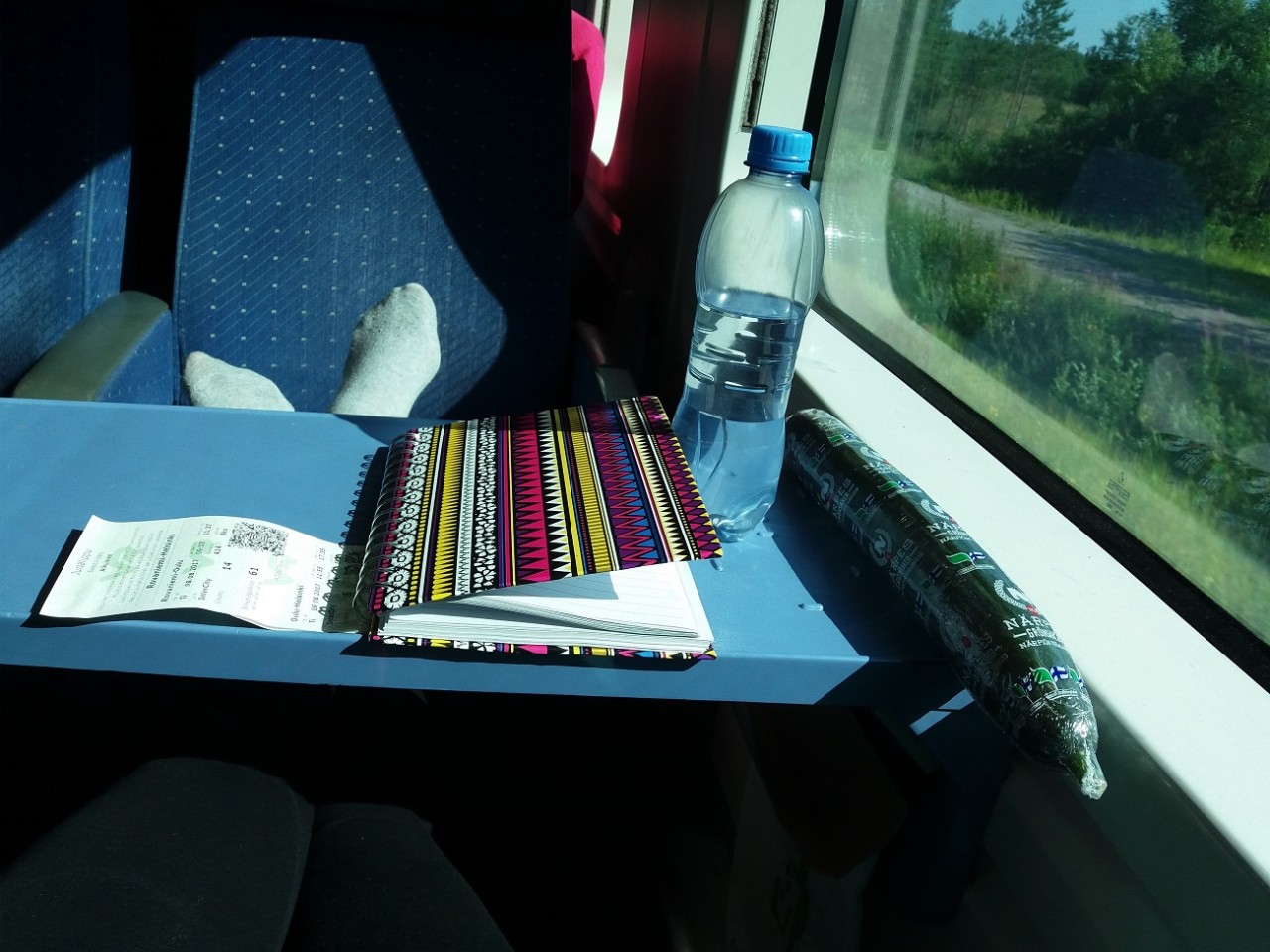 Before this blog post is done, I'm going to share one last thing with you. When I'm travelling long distances by train, I always take one or two cucumbers with me so that I don't have to buy water on the train (or carry several bottles). After all, cucumbers consist more than 90 % of water and the more I eat it, the less I have to carry it.