HOW I BECAME MY OWN HERO 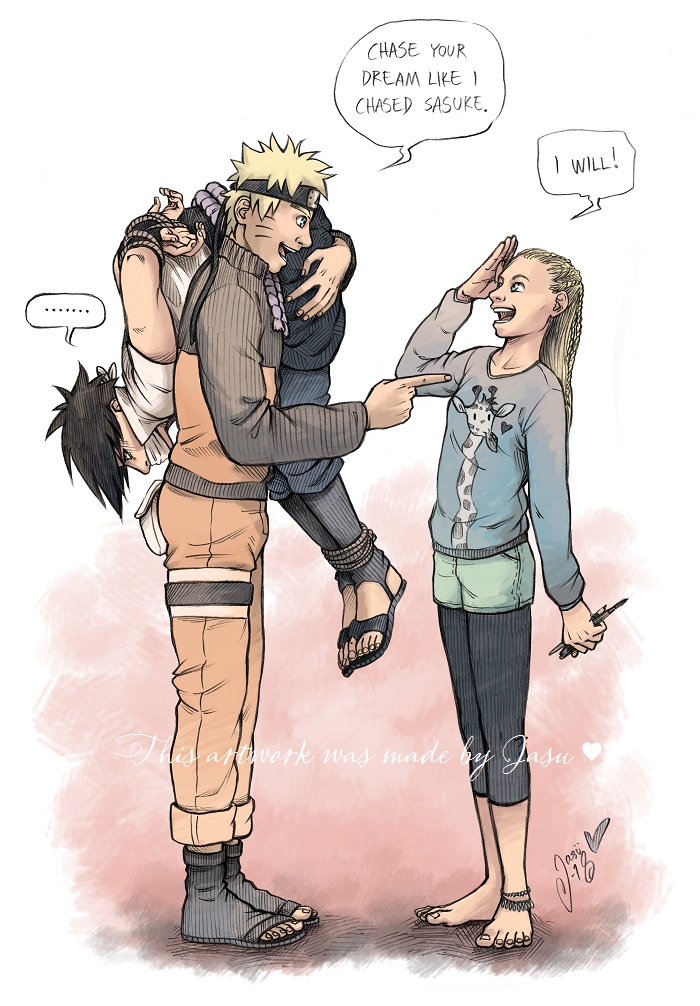 Ever since my official career as an artist started, I've wanted to create this drawing. Jasu Wonder World company was registered on 11th of October which, funnily enough, is only one day after the birthday of Naruto Uzumaki, a fictional character that this blog post is going to be all about.

Years ago, around the age of 17, I started following a Japanese manga/anime series called Naruto, created by Masashi Kishimoto. It soon became my greatest passion which I'd demonstrate by producing fan art like a machine. To give you a vague idea of the amount of drawings, watercolor paintings and digital illustrations we're talking about, here's a simple calculation I made: there are close to 1000 files that I can find on my computer that I produced between the years 2012 and 2015. That is about 330 pieces a year. To put it simply, I was creating something almost daily. And it was all thanks to my great passion to Naruto series.

I had always been very productive when it came to making art. However, what increased the amount of artworks I produced was that I finally started creating comics, which had been my biggest dream since elementary school. I had tried making them before, but my patience was simply not good enough to carry on drawing a story for more than a few pages. In cases I managed to make a story longer than that, it would take me several weeks, even months. Now, thanks to my growing passion for a popular pairing among the Naruto fandom, I decided I'd create a short comic (about 40 pages) about a crush between Sasuke and Naruto, my favorite characters.

This is where everything started to change. My little comic quickly gained popularity, and me, encouraged by this, made creating comics my daily habit. And so I produced one comic after another about the imaginary love life between two ninja boys. I still have one ongoing comic which is like a side project in addition to Jasu Wonder World business. You can follow this comic and see all the hundreds of other artworks I made during my fan art phase on www.sasunaruart.com. You get a full access to the content of the website once you get a Gold Membership. Please notice that there's a lot of adult material on the website and it is not recommended for people under the age of 18.

Now that I'm done covering the background story, it's time to get to the hero business. Naruto used to be my biggest hero for several years. Some of you might already know that I used to suffer from a severe depression at that time. To me, as fictional as he was, Naruto was the person that pushed me and kept me going when I did not yet have the strength I have now. I remember several occasions when I was trapped in the painful depths of my depression. At those moments I'd imagine Naruto in my mind. I'd see him telling me to keep going and to not give up. Sure, he was not real but to me he was a hero, imaginary or not. I cannot imagine where I'd be now if the story of Naruto and his guts to not give up had not been there for me.

Anybody who knows Naruto knows that he's all about chasing his dream. His most famous sentence being "I'm not giving up". During my depression, it gave me the power to stay alive. Now, it gives me the power to keep chasing my own dream. Even though I don't need him to tell it to me anymore. Now I'm the one telling it to myself. It's been almost two years that I've had my little business running. In the beginning, I had no idea how hard it would be. But I think it was a very good thing. Had I known, I might have felt it would be too much for me. To tell you the truth, during the first months of my life as the artist of Jasu Wonder World I'd often cry because I was so afraid of how things were going to work out. I had no guarantee my business would succeed. I still don't. But I made a promise to myself. And to this day I hold on to that promise no matter what it is that life puts on my way. The day I decided to chase my dream and to become a full-time artist, I said to myself: "Whatever it is that I'll have to face taking this path, I will not turn. I will keep going no matter what." And this promise has ever since helped me to get stronger, to beat my depression, to beat my self-doubt and anxiety. It has helped me to learn to work and to work hard, to get up every time I fall (and trust me, I've fallen many times). Slowly but surely I'm feeling happier and happier... Happier than I even knew was possible for me to be. This is how I became my own hero. I sometimes like to imagine myself as a kid and ask myself how I'd react if I was to meet this 25-year-old me and see what I was to become. I know that this little Jasu would not be able to contain her excitement, seeing the incredibly amazing woman she's going to be.

Facebook Twitter LinkedIn Pinterest
How do you feel about this post?
Happy (0)
Love (5)
Surprised (0)
Sad (0)
Angry (0)
Tags:
jasu the artist naruto my story my artist life hero
The Story Behind My Most Popular Painting
DESUCON 2018

We use cookies to ensure that we give you the best experience on our website.
I accept